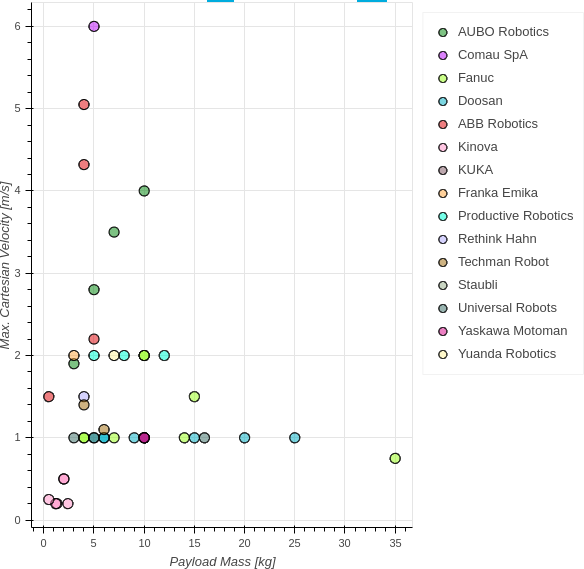 A few months ago I wrote about payload versus maximum reachability of current cobots on the market. I received plenty of feedback on this plot. Some sounded like: “Thanks for sharing. But your plot misses the information on the velocity that the robot can reach.” Hence, in this post I share with you another plot. This time it compares the payload capacity to the maximum cartesian velocities.

The plot below illustrates the payload and maximum cartesian velocity data. The data originates from the Open Robot Database.

We advertise cobots as the new robots that can work closely together with humans. Of course we must preserve safety in such a close distance between humans and robots. One big factor in the cobot safety equation is obviously the speed at which the robot moves.

I have been talking with many resellers, integrators and end-users of automation systems in the past few months. The attitude towards cobots was surprisingly negative in surprisingly many conversations. The common perception was that cobots are slow and inaccurate. Well, go to your favourite search engine with that preset in your mind. You will for sure quickly find some confirmation for that. You will find something like this: “The cons of cobots are: limited reach, payload, speed, and accuracy”.

Frequently in these conversations I heard that cobots are limited by the safety standard to not move faster than 250 mm /s. But they cost the same as a traditional industrial robot with much higher performance. Who would like to spend the same money for the less performant robot?

In fact, it is true that ISO 10218-1:2011 mentions this number 250 mm/s. It is introduced in the context of the safety-rated monitored speed function. Unfortunatly, safety of robots in collaborative applications cannot be assessed or guaranteed by just generally fixing endeffector velocities to that one number. Would be nice, if automation life was that easy, uh?

The topic of robot safety goes beyond the scope of this article. But a bit of background knowledge is necessary to understand this. Luckily, there are great free resources to get into the topic. If you are new to the topic and need a good starting point: I find these two presentations from RIA quite informative for a first start:

Then, the best is to actually read and understand the related standards. This way, you do not have to rely on what other people tell you.

Cobots are not necessarily slow

On the bright side, what a cobot can do in terms of velocity is in general not limited by a single number. You can easily see that from the plot above. Many points are multiples above that limit.

In the absence of a human the robot can operate in non-collaborative mode and go to its physical velocity limits well above that misunderstood number. The actual limit you need to set in the presence of a human in the robot’s workspace is the result of a thoroughly carried out risk assessment and may even be below the 250 mm/s.

Some confusion might remain though. As the robot’s datasheets are not standardized in any way across robot manufacturers. Sometimes you don’t even find the number you are looking for at all. I have included several robots by Comau, KUKA, Stäubli and Yaskawa Motoman in the Open Robot Database. At the time of writing this article, I was unable to find the specification of the maximum cartesian velocity for those robots. Regarding Comau, the new Racer 508 COBOT is the only exception and I found the specification on the product page. Fanuc specifies for CRX-10iA 1 m/s in collaborative mode, 2 m/s in high speed mode. On the pages of TechMan Robot and Rethink-Hahn I read about “typical speed”. How exactly “typical” is defined remains unclear to me though.

What is the maximum cartesian velocity of a cobot?

So as you can see, robot manufacturers tend to distinguish different types of maximum velocities. If you wish to compare the velocity of a cobot to a traditional industrial robot, it only makes sense to consider maximum physical velocity of both. That is what I did for the plot above. The numbers in the plot correspond to the maximum velocity I found in the datasheets published online.

As more and more cobots come up, we will see different robot designs. Their shapes will be intentionally created to reduce the risk of injury of a human upon accidental contact. Some will have soft skins to further reduce the risk. Such features might lead to a situation, where one cobot can be allowed to move faster than the other when executing the same collaborative task with the same tool and payload in the same environment. Then we are looking for the maximum allowed cartesian velocity in that very same scenario following a specific risk assessment.

It seems paradox. Robots are becoming easier to use. They are more lightweight than traditional robots, so that you can carry them around and relocate them as needed. Programming them becomes easier and easier through cross-brand no-code interfaces, virtual realities and “magic” pens etc.

At the same time it appears to me that choosing robot is perceived more and more difficult. Back in the days, where cobots did not exist, life was easy. You compare robots by their maximum velocity, their payload capacity, their reachability and repeatability.

With the advent of cobots, there has been lots of confusion. Some may be induced by marketing raising expectations too high. But there are also new numbers to look at. There are new principles to understand. There are more rules and more equations to consider. Many robot distributors and automation integrators are spending loads of time and effort to educate prospect cobot users about this new world. From the interactions I had, I must say there is still some way to go…

In my next post, I will look a bit closer on the accuracy of cobots.