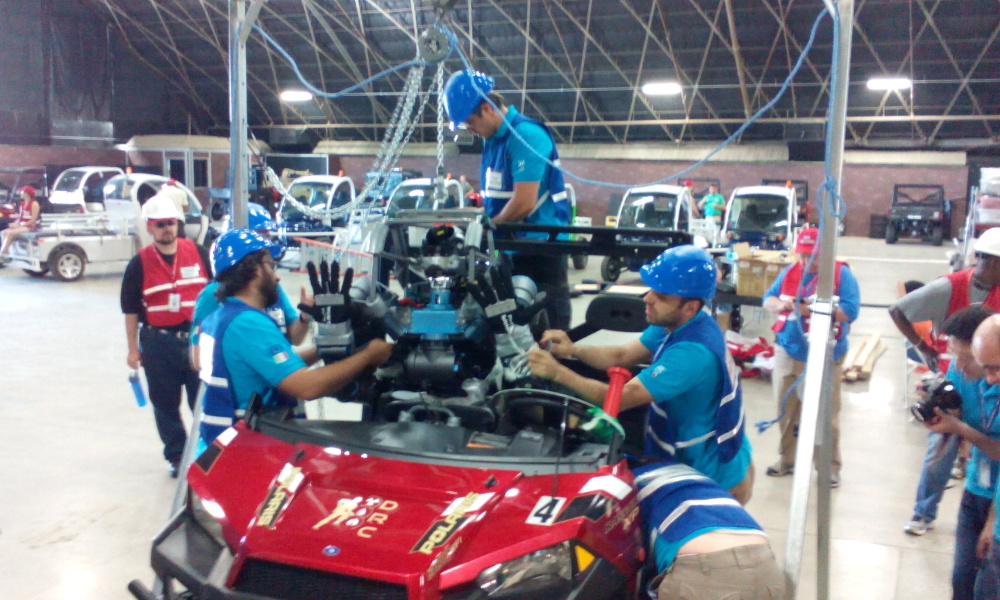 It’s been slightly more than a week now since the DARPA Robotics Challenge (DRC) Finals. Time enough to process and reflect the experiences made during a busy week at Fairplex. Some of them I wish to share here very quick.

I remember well the DARPA Grand Challenges back in 2004 and 2007. As a young undergrad I tried to record some of the streamed videos.

Well, this time I was lucky enough to see the DARPA Robotics Challenge at close range as a member of Team Walkman (Istituto Italiano di Tecnologia, Genova, Italy).

Our robot Walkman is this wonderful piece of technology:

Walkman’s development started a bit more than one year ago as part of the Walkman EU-Project.

The robot is about 1.85 m tall and weights roughly 120 kg. It has been designed from scratch, manufactured and assembled basically within a period of 10 month. Almost everything including battery and joint actuators is custom made. Only the vision sensors are commercially available ones. When I arrived in Genova in January 2015, most parts where still awaiting customs clearance…

Once all parts had finally arrived, the assembly was accomplished in two weeks. After that, we had one month left to until the qualification video submission deadline for the DRC Finals. We faced some busy weeks and finally qualified.

Even past the qualification deadline there was not much chance to take a deep breath. During the qualification experiments we had discovered some hard- and software bugs to be fixed. Building a robot from scratch without facing bugs would have been very surprising I guess…

On the fifth and sixth of June Team Walkman finally arrived in Pomona and began with the final preparations for the challenge. Some impressions from the team garage are compiled in this timelapse video below:

Sunday was basically an orientation day. In the evening we had the opening ceremony with final instructions for all teams.

On Monday we got access to the garage at 8 am and spent the day making ourselves feel comfortable in what would be kind of our home for the next week. The good news: Walkman survived the journey without harm and worked literally “out of the box”! Also the rest of the equipment did the job flawlessly, so that for most of us this day ended around midnight.

During the following days we were busy checking calibrations, fine tuning models and controllers as well as exercising the different tasks. On Tuesday we first focused on the walking. We were unsure how the robot would perform on the challenge site. From the DARPA official information we knew it would not be perfectly even terrain and had just few experiences with walking on larger slopes.

On Tuesday afternoon Walkman took a seat in the Polaris Ranger used during the Challenge.

In the evening we focused on the driving task. The colleagues from IHMC were kind enough to let us have their Ranger until 11 am. Grazie mille for this!

Wednesday was manipulation day. In particular we focused on the valve and the door passing tasks. Unfortunately Walkman showed to have some problems in the left knee joint. One magnetic encoder had given up and we detected some malfunctions in the power electronics of that joint. Our technicians fixed both on site.

Till Friday life in the garage went on pretty much like this. Testing and training tasks. Fixing some bugs in hard- and software.

In general, I appreciated very much the atmosphere within and between the individual the team garages. The place was filled with many passionate roboticist working day and night. Most of them happy to share experiences and help each other with tools or spare parts. Most of them even across the team bounderies. All but one team permantly allowed pictures and videos taken from their garages and obviously not only humans made new friends in the garages…

In the evening you could easily distinguish between those teams that already had long term experience with their robot and those “younger” teams. The experienced teams could rely on mature soft- and hardware and allowed themselves to leave the garage in the evening. The “younger” teams and those who had built their own robot usually stayed during nights. Most of them worked in shifts – just as we did…

Watch a timelapse of the Walkman garage during the preparations here:

Finally, all teams were allowed to do a rehearsal on the actual track. After all the problems with the knee joint suddenly the onboard network switch turned out to be cranky… After 60 minutes Walkman just managed to move the Ranger a couple of meters.

Nevertheless, other teams had it worse. In total 12 teams did not score a single point during the rehearsal. Some just had bad luck. Others obviously did not want to risk too much before the actual challenge. Two teams already had to give up. One weeled robot got frequently stuck in the dirt without a chance of fixing this conceptual issue on site.

Two robots fell during the rehearsal. Many more were following during the actual two challenge days as witnessed in the video below:

Well … so did Walkman. You can see one fall after second 00:19 in the video. At this point Walkman had already driven the Ranger towards the door. The two Atlas teams on the neigbouring tracks were far behind. Suddenly some communication problem caused all robots to stop at the same time. The blackout period was later appended to the runtime. However, during such a idle times, the robots still draw power from their batteries…

After the communication blackout Walkman easily opened the door and started to pass it. Since Walkman has a shoulder width of approximatly 80 cm, this task is not quite easy. The strategy was to turn in place by 90 degrees prior to passing through sideways through the door. Unfortunatley – and that is what you see in the video above – Walkman suddenly switched off completely for no apparent reason. Luckily no damage happened to the robot. It basically rolled backwards. Only one rollover cage got minor scratches.

At exactly the same time of this collapse a robot on the neighbouring track fell as well. The team had triggered the e-stop. Since there was a chance that some cross talk between the e-stops of both teams had caused this collapse, DARPA was kind enough to give us the chance of a rerun in the evening. The evening rerun started in front of the door with the same amount of time left for the remaining tasks as we had at the same stage in the morning.

This time Walkman managed to pass the door. Unfortunately Walkman made a false step right behind the door and fell again. This time the robot landed straight on its left side and finally came to rest on the knee protectors and head cage facing the ground. This time we found many more scratches. On the bright side, the protectors attached to the exoskeleton seemed to have prevented major damages. Just one screw, which actually fixed one elbow protector got deformed. The same screw must have produced the hole in the asphalt of the track…

So we earned our second point.

On the second challenge day, Walkmen finally fell for the third and last time. First, we were able to almost half our time to drive the Ranger towards the door. Right before the door task some jerky motion appeared in the left elbow joint. Perhaps some consequences from the previous day? We did not experience that during the night though.

Next, while passing through the door Walkman hit one door post and almost fell. Finally Walkman collapsed again and sustained some more severe anckle damage. So the DRC Finals 2015 were over for Walkman…

Here is a time-lapse from the Walkman’s challenge runs:

Although it was too bad to see Walkman stop so early after such a good start on the second day, everyone in the Team agrees and also other roboticists confirmed: we have presented a very promising and powerful new robot. Beyond that we showed a performance during the challange, which – not only against the background of the short development time – can be taken serious. We earned two points and left six teams behind us. The basic technology concept seems to work out. With the lessons learned in that week, we can now have the time to mature both soft- and hardware. Unlike with other teams the challenge was not the final goal of the Walkman Project. It was just one milestone in the first third of the project time. Since the robot has been completely developed in-house from the first screw to the very last software bit, we also have the capabilities and know-how to realize all the ideas for improvements that we took home with us. So exciting days are coming up.

And since balancing seems to be one of the toughest challenges we have to deal with, some Walkman team members started with some intensive balancing lessons right after the DRC finals… on one beach in San Diego ;).

Finally thanks to everyone who kept fingers crossed for us!