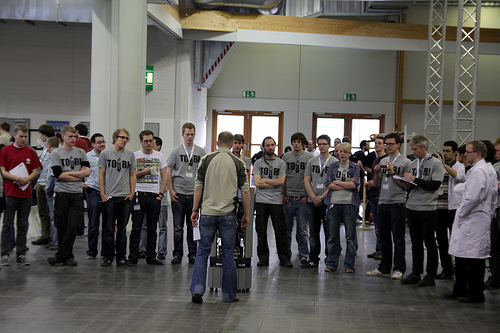 Since the RoboCup German Open are happening right now in Magdeburg and many people are asking me what the different robots actually have to do in the @HOME league, I thought I might give you a small overview of the 2013 RoboCup@HOME tasks. The teams that are qualified for the German Open are:

This is a little less than the 21 qulified teams for the world cup but the German Open have the current world champion (NimbRo) and two more top 5 teams (ToBI & homer) of the last year.

The first specialty of the @HOME league is that the rules change regularly. This is to keep the competition a real challenge for all robots and to avoid that teams are specializing on single aspects and skip others.

The competition is divided into 3 stages, which makes stage 2 a sort of semi-final where only the best 10 teams will qualify for. Hence, stage 3 is the final where only the top 5 teams will qualify for. Over the last years it has become almost a tradition that there are 3 German teams among the top 5 at the world cup and we all hope that it stays that way…

For different parts during the various tasks the referees will award points for each team which combined over all tasks provide the ranking of the teams. This can be something like correctly grasping an object or correctly understanding a speech command. There are also extra points for completing the whole task because each task has a strikt time limit. And obviously there are also penalties for e.g. grasping the wrong object or making contact with the surrounding (e.g. furniture), but the minimum is 0 points so that teams can not get a negative score for a task. In 2013 the stage 1 time limit is 5(!) minutes. The following tasks will be part of stage 1:

Each robot has to autonomously register itself and the team to the competition. The start signal for all tasks is the opening of a door. The robots have to be able to detect that and start the task. After that the robot drives into the arena (predefined position of the registration desk) and has to hand over a registration form there. Afterwards the robot has to leave the arena through the opposite door (there are always 2 doors to the arena). At the same time the teams have to present the team poster and the referees will check the E-Stop button of every robot on the way out.

During this task the robot has to follow a previously unknown person through a public space. This is normally done outside of the arena, which means literally through the audience. To be able to identify the correct operator the robot has to memorize the guiding person (face recognition) and correctly re-identify the guide at different steps of the task.

The robot has to clean up a room in the arena, which means objects will be placed around the room that have to be brought to a previously defined position (bin). The robot gets a speech command where to clean up and where to bring the objects and than has to find/grasp/deliver the objects. The main focus here is navigation and object recognition. As far as object recognition is concerned, the referees provide an official list of objects for all tasks (in all stages) and their names at the beginning of the tournament. Normally about 20 different objects including stuff like cables and of course pringles chips. The teams have to name 10 objects that they can manipulate but no team knows which of the objects will be placed in the arena. There can be objects that are not in the list of 10 in the arena! All teams are allowed to use the objects to train their recognition software in advance.

Emergency situation: fire in the apartment

A new task in 2013! In this scenario all robots have to react to an emergency situation that may occur in normal house hold. This year there will be a fire in the kitchen (smoke!) and the robot has to discover it and then search for people in the environment, notify them and guide them to one of the doors (emergency exit). Main difficulties here are navigation, finding people and obviously detecting the smoke!

In this test all the teams can demonstrate recent research results and/or the scenario in which the robots’ abilities can be presented best. It focuses on the demonstration of new approaches/applications for e.g. human-robot interaction and scientific value and it is very interesting to see what the teams come up with every year.

There is also a technical challenge for a particular capability of a domestic service robot with a changing topic every year which is selected from current state-of-the-art research problems. This year the challenge is “Furniture-Type Object Perception”, an important capability for mobile manipulation robots in everyday environments.

The stage 2, or semi final, has a time limit of 10 minutes for all tasks. There will be only 3 tests in this stage but they are more complex than in stage 1:

In this test the robot has to solve multiple tasks upon request over an extended period of time (approx. 45 minutes). The abilities cover all aspects of tests in stage 1. The necessary actions are organized in three categories with different complexity, which means the scoring depends on the complexity of the action. Category 1 features a speech command of 3 actions which the robot has to show it has recognized, e.g. by repeating the according actions and asking for confirmation. If the robot fails to recognize the command correctly, it can also ask the speaker to repeat the complete command. Category 2 features a command that does not include all necessary information for fulfilling the task, e.g. by giving an object to fetch but not its location. The robot can ask questions to get the missing information about the task but the questions must indicate that the robot has already understood the main objective. Category 3 is similar but the command may contain false information which the robot must clearify while executing the task and indicate why it can not perform the task.

Here the focus is on mobile manipulation in a real environment, such as a restaurant or shopping mall. The robots have never been to the environment before and typically REAL scenarios are used, e.g. a REAL restaurant or a REAL shopping mall. In a first step the robot must be guided through the environment (mapping) and locations for taking orders or object shelves are introduced. After that the robot has to take orders at the according position and deliver the correct objects.

This challenge is similar to the Open Challenge in stage 1 but a scenario is given beforehand. The teams are encouraged to demonstrate recent research results and the best of the robots’ capabilities in the given scenario, which is “health care” for 2013. Possible scenarios are e.g. eating aid, mobility aid, hair washing, making the bed or playing with children (baby-sitting).

Last but not least the final features one major challenge for every team where they can show whatever they want. Every demonstration may take 10 minutes plus additional 5 minutes for questions by the jury, which consists of a league-internal (e.g. the team leaders) and a league-external jury.

So, now you know what all the different robots are doing in the @HOME league. You can also check out the G+ community for RoboCup@HOME. Many teams also have videos of the different tasks on their websites or on youtube. Some example videos:

Frederic Siepmann is re­searcher at the Cognitive Interaction Technology Center of Excellence (CITEC) at the Biele­feld Uni­ver­sity, Ger­many. He is also co-founder and former team leader of the German RoboCup team ToBi. His main re­search field is behavior coordination in interactive robotics.